Waste into Water - A Natural Miracle!

We installed a reedbed water treatment system to treat all wastewater from the venue, cottages and farm buildings. It operates entirely naturally – no chemicals or machinery. Instead it relies entirely on gravity to create a flow of water through a series of different ecological habitats, which also support enormous biodiversity.

The waste water flows, in order, through: 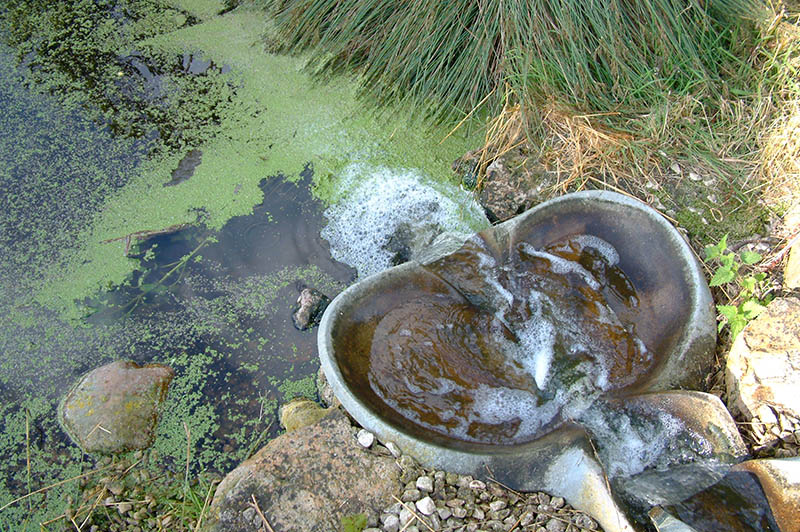 How Does It Work?

As the water flows through the different stages of the reedbed system the nutrients contained in the waste are converted by microbes and consumed by plants. This process means that pollutants and any harmful bacteria are reduced to safe levels.

The first reedbed is a very active ecosystem. It destroys bad bacteria and also converts ammonia into nitrate which is a much safer compound that plants and algae can use.

Moving downstream, as the water arrives at the settling pond, naturally occurring bacteria take up the nitrates and release harmless nitrogen into the air, reducing the pollution in the water.

Air mixes with the water as it splashes around the aerating flowforms and enters a stream. The water flows down stream to the second reedbed and then a wildlife pond. Here, a long standing time kills off germs.

The wildlife pond flows into our beautiful lake and the lake overflows to a willow plantation, before soaking back to the aquifer from which the farm abstracts. The whole system supports a significant population of birds, fish and invertebrates.

The reedbed system was created in spring 2002, but despite its relative infancy, our new wetland habitats proved a magnet for wildlife.

The common frog found our wildlife pond in spring 2002 and was closely followed by the common toad. By 2006 we also had smooth newt tadpoles growing up in the wildlife pond and hibernating at Nut Wood. By 2015 the pond was home to frogs, toads, newts, rudd and perch, along with freshwater shrimp and a plethora of other insect larvae.

Carp, waterfowl and pondlife thrive in the tranquil clean and clear water of the long lake – it actually meets European bathing standards! We have nesting pairs of reed bunting, sedge warbler, wren, moorhen, mallard and coot. Grey heron and lapwing are welcome visitors too.

The diversity of aquatic invertebrates expanded rapidly, with winged wonders including the great diving beetle arriving during the system’s first summer, and now we have a whole host of mayflies, caddisflies, and those delicate devils: the damselflies and dragonflies.

For the final stage of its journey from waste to pristine, the fresh water from the lake overflows into the willow bed where it is released here to seep down back into the chalk in a virtuous circle.

We use cookies on our website to give you the most relevant experience by remembering your preferences and repeat visits. By clicking “Accept All”, you consent to the use of cookies.
Cookie SettingsAccept All
Manage consent

This website uses cookies to improve your experience while you navigate through the website. Out of these, the cookies that are categorized as necessary are stored on your browser as they are essential for the working of basic functionalities of the website. We also use third-party cookies that help us analyze and understand how you use this website. These cookies will be stored in your browser only with your consent. You also have the option to opt-out of these cookies. But opting out of some of these cookies may affect your browsing experience.
Necessary Always Enabled
Necessary cookies are absolutely essential for the website to function properly. These cookies ensure basic functionalities and security features of the website, anonymously.
Functional
Functional cookies help to perform certain functionalities like sharing the content of the website on social media platforms, collect feedbacks, and other third-party features.
Performance
Performance cookies are used to understand and analyze the key performance indexes of the website which helps in delivering a better user experience for the visitors.
Analytics
Analytical cookies are used to understand how visitors interact with the website. These cookies help provide information on metrics the number of visitors, bounce rate, traffic source, etc.
Advertisement
Advertisement cookies are used to provide visitors with relevant ads and marketing campaigns. These cookies track visitors across websites and collect information to provide customized ads.
Others
Other uncategorized cookies are those that are being analyzed and have not been classified into a category as yet.
SAVE & ACCEPT